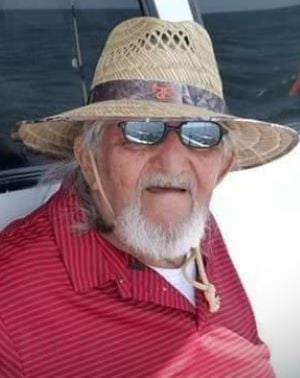 Virginia Beach- Jacob Philip Sayas died peacefully on November 7, 2021 surrounded by his family in his own home. He was born on May 9, 1933 in Milwaukee, Wisconsin. He was a retired Navy Veteran who joined the Navy in 1952 and became a radioman communications specialist and retired in 1975. He did 2 tours in the Vietnam War and received numerous service medals. After his Navy career he worked as a rehabilitation counselor until he retired a second time in 1995 then spent his time building a house/farm in Arrington, Virginia. Jacob was a good husband, a good father, he was an avid traveler, was a very kind and wise man, he loved reading and studying the bible, he will be greatly missed by his family and friends. He was preceded in death by his wife Hope Island Sayas, his parents Victor and Jesus, his sisters Marie, Phillis, Roslie and Josephine, his brothers Frank, Louis and Anthony. He is mourned by his son John Philip Sayas, daughter in law Lorraine Fae Sayas, grandchild Meredith Broadhurst, great grandchildren Brandon and Tyler Hester and his brothers Benjamin and Alvino. A celebration of life gathering with close friends and family members will be announced at a later date.

Cremation & Funeral Services of Tidewater is assisting his family. Online condolences may be expressed at candfservices.com.

Rest peacefully, I look at my dad, my 1st born son and myself and see us in you. Unfortunately I wasn’t able to meet you, talk to you, learn about you, fish with you… any of the things a grandson would love to do with their grandpa. I’ve dreamed about you for many years what you were like, what you look like, do we have things in common, I wanted to know any and everything about you. Rest easy Abuelo Sal

Rest In Peace to my godfather and uncle Sal. Fond Christmas family memories when I was younger at grandpa Victor’s house. My deepest condolences to the family.

Rest In Peace brother Sal you will be greatly missed. Benjamin and Roni Sayas (Ricco) – Niece.

As his first cousin I will miss him very much. I will always remember the last time I spoke and saw him in Texas at by brother Keno’s home in 2016. Loving you Barbara Sayas

To my loving wonderful father who taught me all my good values, you taught me to take care of my things, fix my cars, build my house, never be late on my bills, treat people with respect, work hard for an honest living. You gave me the best childhood anyone could ever have all my memories of you I will cherish for the rest of my life. You were a wonderful husband to my mother who adored you God rest her soul. All my friends who knew you thought you were an awesome guy. So many good memories were made… Read more »

To a wonderful Father in law who I was Honored to know and be a part of the Sayas family. Your Son John followed in your foot steps and learned so many things from you, his skills for building stuff, car repairs, family values and so much more. You will be missed by so many but never forgotten. Jacob some called you ” The Legend” and I believe this to be true. So many great memories and stories we will all hold in our hearts and pass to our Families next generations.
Love

Words fail to express my sorrow for your loss. Please know I am with you through this difficult time. Keeping the family close at hear and in prayers. Love to all.

“Sal” as he was known in his early years was a man I never met but I will always remember and live in my heart as the man who gave me life. RIP father. His biological son Robert Philip Romano