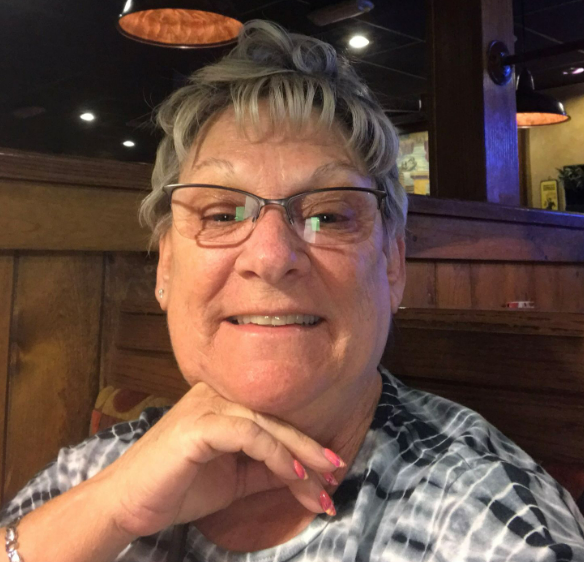 Virginia Beach- Laurie J. Johnson, age 63, passed away peacefully with her husband DJ by her side after battling pneumonia. Laurie was born in Washington, DC on December 19, 1958.

Laurie joined the Air Force on December 3, 1977 and gave birth to her daughter Denise in October of 1978.  Laurie was honorably discharged on May 18, 1979 to raise her daughter.  Laurie spent the next 12 years supporting and raising Denise, building a special mother-daughter bond that would last forever.

Laurie met DJ and fell in love, married on June 16, 1990 in McLean, Virginia.  Laurie and DJ spent the next 32 years living happily together.

Laurie spent several years working in flower shops, with her love for flowers.  Laurie worked as an Office Manager, retiring from The Gerontological Society of America in 2008 where she gained several long lasting friendships. Laurie and DJ retired to Sandbridge Beach, Virginia in 2017.  Throughout her life, Laurie enjoyed gardening, puzzles, classic movies, and most of all spending time with her family.

Laurie will continue to hold a special place in the hearts of those that knew her and that she shared her life memories with including her immediate family, extended family, and close friends.

In lieu of flowers, we ask that you donate to the Sandbridge Volunteer Rescue Squad in Laurie’s name.  You can donate by using the following link:  https://www.sandbridgerescuesquad.com/support

Cremation & Funeral Services of Tidewater is assisting her family. Please leave condolences to her family at CandFServices.com.

In Loving Memory of My Sister Laurie Laurie was my ‘baby’ sister (even though Kenny was the youngest, Laurie was always the baby in the family, and she liked it that way). She was eight years younger than me, and I had moved to Las Vegas when she was only 14 years old; so, it wasn’t until our grandmother and mother were ill that we rekindled our relationship. I couldn’t have asked for a better sister then and for the next twenty years. I remember coming home for Laurie’s marriage to DJ. I was so excited that the perfect guy… Read more »

DJ, I am so sorry to hear of this sad news. I’m glad you got to spend quality time together after you retired. I remember our conversations about time being so precious. I do miss our annual lunches and conversations about what’s really important. Time with family being the most important. My condolences, Marsh

I remember vividly the day Laurie was born, and a couple of days later watching her mother return from the hospital carrying her in her arms up the steps of their front porch that adjoined ours. Her sister Sandy and I spend many happy hours playing with her and my little sister who was the same age. I remember when they were toddlers, how we loved sitting with them on the grass in our front yards and weaving branches of mountain laurel flowers that grew on bushes there into wreaths. We delighted in placing our homemade wreaths upon their their… Read more »