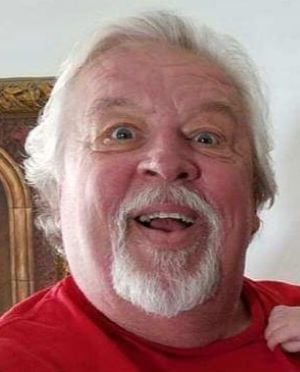 Samuel Lafayette “Sam” Poore III, 63, of Virginia Beach, passed away July 31, 2022. He went to be with the Lord, with family by his side, after a valiant battle with cancer. Sam was predeceased by his father, Sam Poore Jr. and his son, Jason Poore. He is survived by his mother, Faye Poore, daughter, Janie Thomas (Dvonte), sisters, Debbie Burdett (George), Sandy Brown (Ronnie) and brother, Charles Poore Sr. (Cindy Blackburn), along with many loving nieces, nephews, cousins and friends, including his dear friend and caregiver, that never left his side for the past 2 months, Dwight Carden.
Sam was one of a kind, affectionately referred to as “Big Daddy” and “Brother Monk Monk”. He grew up in Virginia Beach, attending Princess Anne High School and spending the majority of his adult life as a residential and commercial painter, owning his own business for decades. Sam had a magnetic personality, always quick with a joke and an arsenal of entertaining stories. He had a huge heart and never met a stranger. He will be deeply missed and a giant void will remain in our hearts. Condolences may be expressed at www.candfservices.com.

Heartfelt condolences sent to Sandy Brown and her family. I was saddened to hear of the passing of her beloved brother Sammy. Sending hugs and prayers!

My heart is aching for the passing of my Amazing and Handsome Brother/ Best Friend . I have so many fond memories of My brother and I miss him and love him so much! I love you Brother Monk Monk. You gave it a heck of a fight, Your body was just worn out . You May Be Gone But Never Forgotten! Until We Meet Again!

Uncle Sammy was a very loving man with a huge heart. He would do anything for anybody in a moment’s notice. I still remember when I was younger Sammy would watch us, protect over us, and always made sure we had a great time. The thing I will remember most about Sammy was his ability to brighten someone’s day and make them laugh. He was the funniest person I’ve ever met in my life. I will cherish the times I spent with him throughout my life and can’t wait to see him again one day. I love you uncle Sammy.… Read more »

To The Family of Samuel (Sam), Judy sent me the obituary this morning, I am sorry to learn of his passing. May God be each of you in the coming days, and know that you will see him again over there along with others who have gone on before in a much better place than we are today. God bless each of you and take care of one another and please continue to be safe.